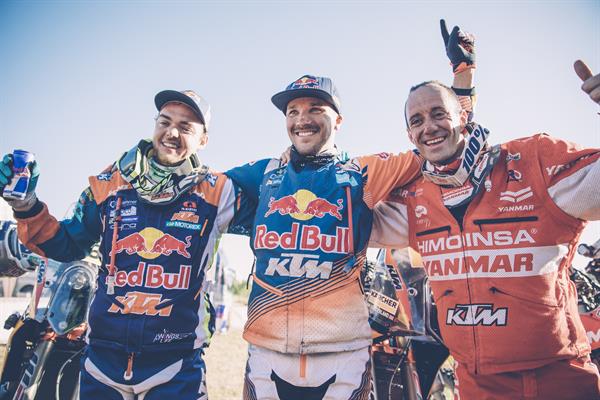 It’s known as the toughest, most unpredictable race in the world, and this year’s story certainly demonstrates that, as Sunderland and Walkner not only succeeded in taking the top two positions, but also in their main goal of completing the 12-stage rally for the first time. Both had retired with injury and sickness in earlier editions.

Sunderland, who is the first British racer to win the Dakar in any category, went into the final 64 km timed special with a 33-minute advantage aboard his KTM 450 RALLY and, having led the race from stage 5, the 27-year-old held his nerve to take victory after almost 9,000 km travelled through Paraguay, Bolivia, and Argentina while battling with incredibly challenging conditions and difficult navigation. Sunderland’s Austrian teammate, Walkner, had a little more pressure in the closing stages from fellow KTM pilot Gerard Farres Guell, who finished in an eventual third position and Adrien Van Beveren who won the final stage. It was an incredible turn of events for the Red Bull KTM Rally Factory Racing Team, as teammate and 2016 winner Toby Price went out in the fourth stage after crashing and breaking his leg in four places. Following surgery in La Paz, Bolivia, the Australian desert champion has now returned home with the aim of being back on his KTM 450 RALLY machine in four months.

Sunderland: “When I crossed the line my emotions really took over. I've had a lot of weight on my shoulders for the last six days. Now it feels incredible. I have to say thanks to my team, the bike has been great from start to finish. When Toby (Price) went out of the race it was a blow to the team, as he’s a good friend. Because of the strong bonds we have in our team it helped us to pull together and strive to do something special. There’s a lot of fast guys that have the potential to win this race, I think cutting out the mistakes was the key to this win.”

Walkner: “This was a really rough Dakar so to arrive in Buenos Aires on the podium is an amazing feeling. I had a tough last year, so to be here now is a dream come true. The hardest moment came on Stage 10 because there was the potential for my position to change on this day. I really studied the roadbook before the stage to hopefully get some advantage. That paid off for me and it felt cool to get rewarded like this.” Spanish KTM factory racer Laia Sanz, who had a very successful second week after losing time in the first half of the event, wrapped up her rally in an impressive 16th overall, just one place short of her pre-race goal of a top 15 finish. The five-time Women’s Enduro World Champion, Sanz, is the standout woman rally-raid rider.

Alex Doringer (KTM Rally Team Manager): “The Dakar, with all of these weather conditions, heavy rain and muddy conditions, it was quite difficult for the team from a logistics point of view. I think for the riders, it was quite a different Dakar. There were not as many kilometers of special stages but it was intensive both physically and mentally. Sam did a fantastic job and he was very consistent. Also Matthias was the same.” Doringer also paid tribute to Sanz, saying: “What Laia does is amazing.”